I love, love, love catering weddings and making wedding cakes and making things special for people I love.  I sort of discovered that I’m an adrenaline junkie.  I love the thrill of planning, purchasing, preparing and presenting food — any kind of food — for parties and weddings.   I love hearing what people want to have served at their wedding.  I love getting a glimpse of what they’re picturing for the day.  I love picturing it myself — grasping it — and mentally preparing it and then I love telling them: Okay… we’ll do it!

It’s sort of like getting a kite, assembling it, going out on the perfect day and running and running like crazy and then looking back watching the beautiful kite take flight high in the sky… and once it’s up and steadily flying — I love just standing there a bit longer to take it all in.  That’s what events are like to me.  Run, run, run.  Hurry, hurry, hurry.  Go, go, go… and then — all of a sudden: It’s…….. showtime!!

We had the great honour of catering a wedding last June.  It was both elaborate and complex in that we had to be absolutely certain to not miss a beat, not forget a morsel and not overlook a single detail.  The wedding was not local — it was in another state, the location would be exceedingly remote and there were no conveniences nearby.  So everything had to be carefully planned to the minutest detail.  The van had to carry the food, the pans, the prep materials and *US!!*  [note:  Wes did go back to the nearest town the next day for the perishable foods — which was also part of the plan]

For example, the six – 5 gallon buckets of icecream had to be purchased at the last stop out of town.  I had to be sure that three of them were iced and  allow the other three to remain as cold as possible but also “thaw” a tiny bit over the hour+ drive to the site.  The reason for that was that I would begin assembling the “Dairy-Queen” style Ice Cream Cakes as soon as we got there.  That also meant that the six pans, the parchment, the filling and the plastic wrap also had to be very easily accessible.  Because I had planned every hour of the two and half days before “showtime!” I knew just what we needed to do.  I had gone over and over in my mind what we’d need to do from the time we arrived until the day we drove away.  See what I mean about being an adrenaline junkie?

So… why is THIS event on the list of my 30 favourite things from my fiftieth year?  Well…  the people were exceedingly important to me — thus, their wedding had to be perfect.  Because I love that family, I was so honoured to serve them.  They had specific dreams and wishes and it was important to me to do whatever possible to make sure those dreams and wishes materialized.  All the way down to that IceCream cake.  The groom is nuts about Dairy Queen cakes — so, to duplicate them was my highest priority – in both taste and appearance– but, actually, I had to do it better.  You know.  A girl has her principles.  And, on principle, I had to do better than a ‘fast food‘ place. ;o)

Now, lest you think *I* did all this — I assure you *I* did not.  My whole family was in on the action.  Jobs for everyone — great and small.  I did see to it that the youngers had lots of time to run and play while we worked and the setting couldn’t have been more perfect.

I will never forget that event… and space & time does not allow for more details.  I’ll let the menu and photos finish the story.

At the last moment before the ceremony… a tremendous downpour necessitated making a major-major change in venue and we had to set up all the service indoors… for the food service, we had to utilize steam tables (that we had only been using as a holding place) and abandon the beautiful outdoor displays and serving tables.  We also assisted in making a major last minute change of decorations and seating while all the guests attended the ceremony.  And you know — it was the hand of God in that we were able to transform (what was to be an outdoor reception) the lodge into a beautiful reception hall as if it were planned that way.  Astonishingly, Everything was ready when the guests returned from the site of the wedding ceremony.  Whew!  It was *incredible!!*  And thanks be to the Lord God.  Thanks to my family and great thanks to my precious husband…. he’s more than everything to me.


In haste, we didn’t get too many photos… and these aren’t all that great!!  But it’s sort of a taste. For the eyes. 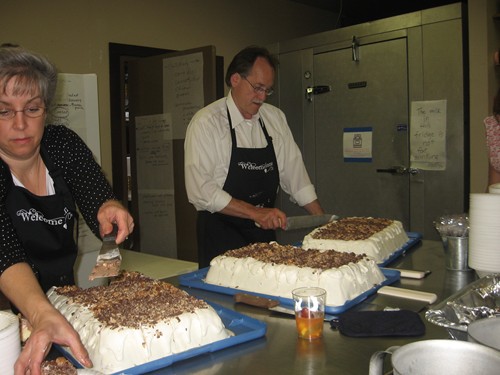 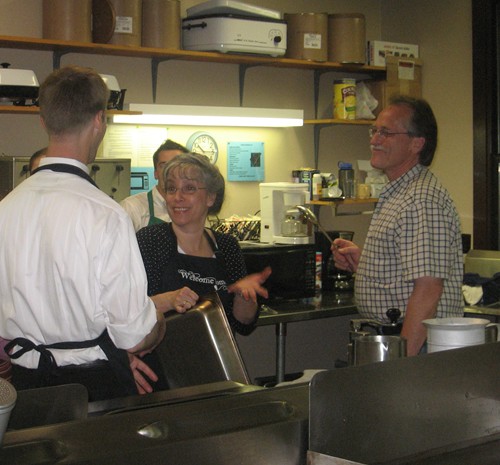 it was a wonderful – wonderful time.   And a total adrenaline rush!! ;o)

So, I made it… and here are some photos…