(mis)perception — even still, God so loved the world that He gave… 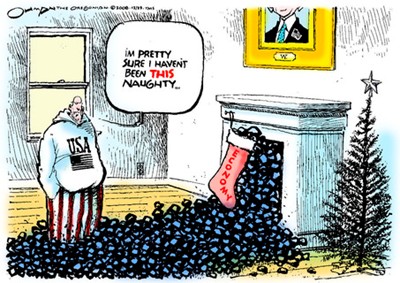 And… isn’t this just the epitome of man’s view of self before God?  I’m pretty sure I haven’t been this naughty?!?!

And yet… the world goes on in its perception: “just happy as I am, thanks” day after day.  A sad misperception of the Truth.

There is none righteous, no, not one.  And yet we all want to think we’re just a-okay — that our lives are going along just fine and we don’t need any intervention or any interruption from any judge – and for many, much less: the Judge of all mankind.  We would like to think we’re the ones in control of our lives – our destiny and our future.  All sorts of sin and deceit are brushed off — for none of us would dare to imagine we’re unacceptable by nature.  Even if we admit some naughtiness — we want to quickly cover ourselves — excuse our failings.  Even in the face of the stark reality of sin, we’ll attempt to hide sin and proclaim some righteousness, some self-preservation. Sons and daughters carry on this legacy of deceit and are nearly excused for doing so… consider this:

The competition is greater, the pressures on kids have increased dramatically,” said Mel Riddle of the National Association of Secondary School Principals. “They have opportunities their predecessors didn’t have (to cheat). The temptation is greater.”

Despite such responses [to the large-scale survey of highschool students], 93 percent of the students said they were satisfied with their personal ethics and character, and 77 percent affirmed that “when it comes to doing what is right, I am better than most people I know.””

When self is the measure or standard, we would all tend to think we’re ‘better than most’ and a few of us would perhaps humbly say we’re probably not as good as someone else… but that’s according to man’s standard… but according to the perfect law of the Lord, *all* have sinned and come short of the Glory of God.  None can stand before the Lord and claim to be “better than most.”  All will be judged by the perfect Law.

But it’s foolishness to men…  men who walk on in darkness believing themselves to be good enough or “better than most”think the Bible, the laws of God are just not for them!  And yet all will stand before God.  Death will come in a moment none can fathom and will bring men and women to the feet of God — the Righteous Judge.  No one will escape the Judgment.  No one.

“For the preaching of the cross is to them that perish foolishness; but unto us which are saved it is the power of God.”
1Corinthians  1.18
“For after that in the wisdom of God the world by wisdom knew not God, it pleased God by the foolishness of preaching to save them that believe.”
1Corinthians 1.21

There is a Redeemer.  Only One.

0 thoughts on “(mis)perception — even still, God so loved the world that He gave…”

Songs in the Night

The Eternal God is thy Refuge