I love the testimony of a plaque that hangs on the kitchen wall at our friends’ house. She’s Nana to six grandchildren. As is shown below, the first four letters of the word, spoiled, have been crossed out. It’s a great conversation piece and thought provoking, too. Too often grandparents and other people joke about little children and poke fun at rules and limits. Almost mocking indulgences are made when people give children “treats” or other things the parents wouldn’t want them to have or would want in moderation not excess.

We’re of the same mind that the worst thing a grandparent can do is to “spoil” the grandchildren — for I know of few things worse than spoiled individuals (or spoiled anything, for that matter). I’m thankful our parents have this same mind, by the way. It’s made our job so much easier with our own children and spurred us on with our grandchildren, too.

Of what value is it to children if grandparents undermine the training and values the parents are attempting to instill? Of what genuine worth is an indulgent grandparent? O, I am not equating kindness or “pampering” or sweet-treatment to spoiling, for it’s a delight to tenderly care for and guide children and grandchildren. No… that’s not what spoiling is. Spoiling is allowing children to get away with things contrary to the parent’s teaching… contrary to the biblical disciplines the parents are instilling… contrary to wisdom. Spoiling is a destructive manipulation many well meaning grandparents use in order to gain favor in the grandchildren’s eyes. But the trouble with that is that the children will have to eventually discern who’s really loving them and they’ll be torn between loyalties… loyalty to parents and loyalty to grandparents.

Leading children along right paths is one of the great privileges of grandparenting. I’m seeing it as a second opportunity to do well with and for the first child.

Happy Grandparent’s day to the grandpa’s and grandma’s! 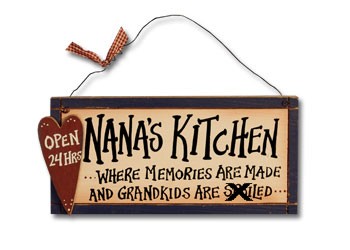 May we all have sweet memories of children and grandchildren who are not spoiled but are led well!