The Welcome Home | slices of life and views of the day 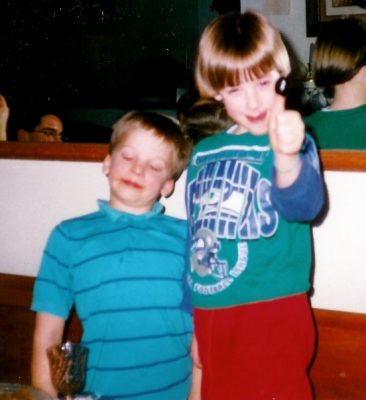 What I remember of the early days was buying film and flash bulbs, taking pictures during special events and occasional pictures of our children’s milestones or accomplishments. And those quick get the camera adorable poses.  We’d get to the end of a roll of film and put the roll (along with the other rolls) in a drawer to be developed when we had enough money to do so — which would be days, weeks or years later! Sometimes stores (Bartells in Seattle ~smile~) would have film developing specials and we’d sure take advantage of them – sometimes having ten or more rolls to develop!  We’d take the film in, fill out an envelope for each roll, place the roll in the envelope, seal it and drop it in the bin to be developed.  We’d wait a couple of weeks and finally get the phone call (on the kitchen-wall rotary phone with the mile-long coiled-cord) that our pictures were ready! We’d go, pay for them, and hastily open them up right there! to see the beautiful pictures and the not-so-beautiful blurry ones and black nothing shots.  No previewing, no editing,  no instant delete in those days.  It’s hard to believe, now in retrospect, that the whole process was so involved, so time consuming and seemed to be so expensive. But that’s how things went back then. Incidentally, you wouldn’t know it was like that by the sheer number of photos nearly filling three under-bed boxes.

Those were the days before digital images we now take by the hundreds without a single thought of expen$e (unless we factor in the co$t of our phone$ and/or camera$!).  Ironically, considering how many developed photographs as we have, it’s interesting to see some very distinct, unique differences between the photos of yesteryear and today.  As I took stacks of photos in hand to deal them out into the 25  different boxes labeled by year, I smiled as I began to consciously see the obvious then and now differences.  There were no “selfies” or random prolific “photoshoots” of everyday life, voluminous numbers of photos of significant and not-so-significant events, week-by-week pregnancy shots, day-to-day, week-to-week, month-to-month baby photos, etc., etc.

This digital generation (and offspring) is surely the most documented, photographed, recorded — in the history of the world.  (I just became my grandmother!)

This current little 😉 project is precipitated by the purchase of a photo scanner. We knew it would take f.o.r.e.v.e.r. to get to scanning each photo individually.  So, Wes shopped around for a digital scanner that would do stacks at a time – and we figured that, presorted, they’d be easy to file just as we’ve filed our digital images for the last 16 or 17 years.  Theoretically, this was to be a simple project — had the photos had dates written on the back, it might’ve been. My bad.

Big takeaways from this project so far? There was sure a lot of living. A lot of children.  A whole lot of time’s gone by. I sure wish I’d written dates. on. the. back. of. each. photo. So many things I wish I’d done.  I know I thought I’d never forget. :-/

You know what’s funny? It’s like there are no parents most of the time. Just kids. Kids at events; at home; on swings; at parties; in plays. Kids sitting in a row.

Today’s melancholy tears remind me: the parents were there.

pamela spurling Information about the author you selected

♥ make your bed every morning
♥ stretch
♥ mentally list 5 things for which you are thankful
♥ read your Bible every day — get the Bible app if that will help you remember
♥ tidy your house
♥ plan your dinner meal each morning
♥ be kind (today is being remembered by your family)
♥ laundry 2 by 2:00, 4 by 4:00 (loads done, folded, put away) depending on your family size
♥ don’t compare yourself to others. they aren’t you.
♥ no piles of dishes in your sink. no piles of clothes on your couch.
♥ you can do what God’s called you to do — depend on Him to be your guide.

It’s my hope that you’ll find help, encouragement, and inspiration through the many years of blog entries, articles and links accumulated here. God bless you & thank you for visiting. ☕ Join me here anytime as I share “slices of life” —experiences, observations, joys & sorrows and blessings beyond the counting.