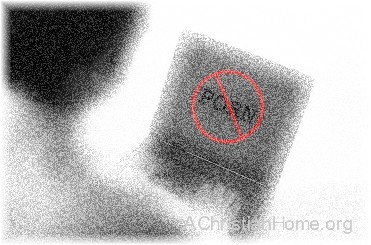 The devil’s playbook is very thin.
From the beginning, the devil has had the same answer to problems, behaviour, disobedience.  His solutions have ever been: Hide it. Kill it. Destroy it. Deny it. A simple check of a computer’s history will shed light on user’s behaviour.  No history?  Why?  Huge gaps in history?  Why?

Porn destroys the purity and sanctity of life — of marriage — of intimacy.  Secrecy and guilt change people and lead them to behave in ways they would never have thought they’d behave — to do things they could never imagined they’d do.  No one sets out to be unfaithful, but that’s exactly what happens when a spouse is involved in porn–though they may feel no real harm’s been done.  No longer is there sweet assurance of being wholly and singly devoted to the other (there’s the parenthetical online involvement that seems to not be actually, really in the home). No longer is appetite and desire a simple outpouring of the love relationship of a marriage.  It’s been supplanted by new images, activities, fantasies.

It’s interesting when Time Magazine will dedicate a cover story to an issue that may have earlier been an issue only in certain circles.  It seems to me that when “the world” is concerning itself with a “moral” matter and calls it an epidemic, the church really ought to take notice.

It’s late in the game.  But let’s not believe the devil that it’s too late.