Throughout the seemingly long afternoon I received surgery updates from the nurses and soon I would hear the words I longed to hear:  He’s doing fine.  After Dr. Ryan explained a few specifics about the surgery, he said Wes was very cooperative throughout the surgery.  I still wonder what that meant. 😉  Then he asked if I had any questions.  I thought, Owow — I ought to have some questions — I’ve had all afternoon to think of questions — surely there are some important questions one would ask at this point.  All I could say was, It’s a new day… I don’t know what questions to ask.  I thanked him for saving Wes’s life.   I had nothing else,  just:  Thank you.  Thank you.

A new heart also will I give you,
and a new spirit will I put within you:
and I will take away the stony heart out of your flesh,
and I will give you an heart of flesh.”
ezekiel 36.26

To which we truly can only say: Thank You.
Thank You spiritually, thank You physically.

I’m thankful the Lord never wastes a thread.  I’m thankful His ways are only good all the time.  I’m thankful He goes before us and there is nothing hidden from Him, nothing He does not see, nothing He cannot do — no purpose of His is thwarted by any means.  The Lord did me a loving favour four years ago to allow me to see His merciful, healing hand.   Early that warm July morning, I’d been on my face before the Lord and knew with certainty that if He would choose to heal our son if He would choose to take him home that that fifty/fifty chance of survival the doc was offering was a win/win.

I had fainted, unless I had believed to see
the goodness of the Lord in the land of the living.
–ps 27.1

Out of surgery now and getting Wes settled in his room, the nurse told me I might want to wait a bit, that it might be a startling sight to see my husband on a ventilator and that he would look a bit different due to some swelling and that there would be a lot of equipment and tubes and things…  I nodded to her and thanked her — and inside I thought: I stood beside my son… I know I want to stand beside my husband.

I could see that even though he was still heavily sedated the pain was tremendous.  Over the next hours he would have the vent removed and reality would set in… he was going to have a painful recovery period.

Our children and grandchildren had gathered in the waiting room by this time.  It was quite a sight… could’ve been a wedding a funeral, a surgery or a World Cup game there on the television… family all standing around talking together.  One of the boys brought in several boxes of pizza and they were all strategizing what to do next, how they’d get all Wes’s  pool jobs done and who would do what in the weeks ahead.  There was so much work to do — I wish the scene could’ve recorded for Wes.

Through the course of the evening they all had opportunity to go in a few at a time and stand beside him, to talk to him and hold his hand.  His tender smile and recognition was comforting to each one of them — their short visits would be repeated throughout the night. 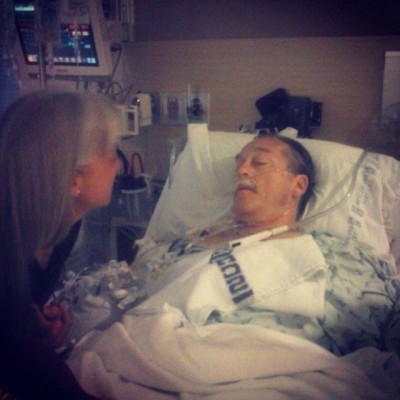 I decided to go home for a few hours late that night… and as I drove across the trestle, it began to sink in what all had transpired that day — how the Lord had very clearly directed the path, how He’d answered that humble prayer so specifically and how He’d provided “just what the doctor ordered.”  I say it began to sink in… but I’m not actually sure even today that I grasp it all.  But this I know:  it was a new day and once again Providence did rise before the sun.