We have a tradition in our family that began with our firstborn son, Daniel, and we’ve carried it on through the years.  Amazingly.  Well – I say amazingly bcz it truly is amazing to me that not only did we set about doing this same thing or carrying on this tradition, but that we’ve been able to do it each time an eighteenth birthday comes along.

I smile at the coincidence this entry being blog post #18 of 30 Favourite Things from my fiftieth year.

Twelve or thirteen years ago, before our son, Daniel, turned eighteen, we talked about what we would do to celebrate his eighteenth birthday.  We talked about what we’d do – where we’d go and how we’d commemorate his birthday and completion of school.  So, we chose what we thought was a very special and very unique place to take him for dinner.  Since the dinner menu prices were so exorbitant, we decided: lunch instead!  We surprised him that morning as we made our way to Seattle and the Space Needle, one of Seattle’s most famous landmarks.

It wasn’t until lunch with Timothy a few years ago that we decided to include everyone who had reached that 18th birthday in the celebration.  That idea came to us quite by surprise.  Wes had called Daniel whose office is downtown Seattle and he was able to get away and join us for lunch that day.

Which brings me to this past year — last April — when Samuel’s eighteenth birthday came around, we made plans for his special lunch.   Though both Kathryn and Timothy were in Uganda and Ghana, and were sadly not able to be there with us, we did take Samuel to the Space Needle and we delighted that both Daniel and Michael were able to join in Samuel’s 18th birthday celebration.  I felt like a queen dining with those four handsome men — it was wonderful.

It was really quite a delicious lunch and a wonderful time as we talked about days gone by, about Samuel’s plans for the future and previous eighteenth birthday celebrations!  I’m so thankful we did that… so thankful for traditions! 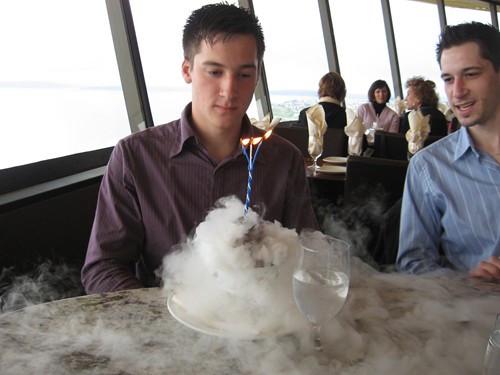 Samuel enjoyed the  Lunar Orbiter Dessert… ahot fudge sundae set in a bowl over dry ice… it’s pretty impressive — something the Space Needle Restaurant has been serving since the 1962 Seattle World’s Fair.

Ahhhhhhhhhhhh another sweet and happy memory from my fiftieth year… and to think there’s more!! ;o)