Celebrating the boy and the azalea bouquet

Seventeen years -years!- we have been celebrating the birth, blessing and life of our Samuel—yep, seventeen today. 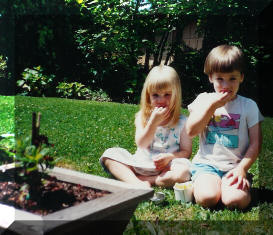 hannah and samuel eating strawberries on the lawn…
a long time few years ago.
It looks like they’re eying the tree stump doesn’t it? ~wink~

Gotta tell a funny story. This’ll be sweet for the gramma’s and will be, hopefully, encouraging to younger ma’s. As you can see in the pic above, Samuel and Hannah are sitting on the front lawn. We used to live in a home that was situated at the center of a cul-de-sac and all the gardening done there was in containers and hanging baskets. So, I had an azalea plant that I had, for a few years, pruned and had trained into an azalea “tree” and it was quite beautiful! Well, earlier that spring, the other children had been bringing me bouquets of beautiful spring and wild flowers and so, imagine, if you will, my surprise(!) when Samuel came in and brought me the *whole* top of the fully blooming azalea tree. I am *so* glad that at that moment I exclaimed *delight* at the gift – instead of anger! Part of that delight, actually, was stunned surprise! I told him that was the most beeeeeutiful bouquet I had *ever* received. I kissed and thanked him.

Just this morning, I was telling Samuel that I haven’t ever received as gift that was given with such love and joy as the gift of the azalea bouquet… and I hoped his birthday was sweeter than that.

And you know what? I’m still wondering how he ever lopped off that azalea tree.

0 thoughts on “Celebrating the boy and the azalea bouquet”