Today is day six of my Umpteenth and One diet. I don’t really know how many umpteen is, but I know it’s a lot. And I know it’s not specific, for I could never actually recall the actual diets I have attempted. I say attempted, bcz actually, I have never really strictly adhered to a diet. Well, maybe the Cambridge diet (I dunno—was that product recalled? did women die on that diet?) many years ago. That was the diet where a friend of ours (who was a rep of that company, by the way) came over and while he was eating at our table and drinking our coffee he told me I was so fat. Yea, really. I remember being so shocked at his bluntness and the candid expression of his thoughts. But then—in retrospect—I see that he was seeing me as I wasn’t seeing me. He was seeing that I was overweight and on a road I should never have been on and a road that would never be good for me. Plus, he did rep that product, by the way. I had just, six months prior, given birth to our second son. I wasn’t seeing myself as “that bad.” I wasn’t’ seeing the staggering results of that road should I continue to remain or travel it. I was thirty pounds overweight. It’s the same thirty pounds I have dropped off and picked up― dropped off and picked up several dozen times through the years in the course of a bunch of pregnancies and umpteen diets. Overweight’s not healthy… no matter how it might seem or how difficult it might seem to be to reverse. And thirty or twenty or ten pounds may as well be one hundred when the problem is out of control.

So, I was talking with two trusted friends… and I was telling them that I needed to get a food-divorce. I’m not ordinarily this flippant ― but I needed a strong description for the glaring problem I was/am facing. And as my friend rightly stated, that’s the only time or place I would use that term. One of the friends said it’s the only time she’d recommend to “leave that loser” and be free. I feel the same way. She and I are never glib or joke about marriage or men or husbands and so the divorce analogy is very finite and specific to this problem ― it breaks down immediately and therefore, I apply it in the strictest sense: I need to break the bonds I have with food and have a proper relationship or perspective of nourishment and tasty meals ― and I do see a right balance or right connection … I just need to get a handle on what that means for me. And I do see that the food relationship is different for or is as individual as people are. I’ve also had to get straight some what and why questions. The “What am I doing and why am I doing it?” sort of questions. This, by the way, pertains to both the eating/preparing food and the abstaining or limiting of the consumption of food. As the days go by, I’m seeing it’s not the food but the eater. When I hear someone say (or myself say), “I have a weight problem.” I think no, no, no… you (I) don’t have a weight problem, you (I) have a different problem. O, the weight may be a problem to you (me), but it’s a symptom of a problem, it is not the problem. The issue is gluttony… yes, it’s even a sickening word to type let alone possess the sin habit of gluttony. I gotta interject a big disclaimer here —sincerely— I *do not* believe all overweight is gluttony or due to gluttony. But this girl’s weight *is* and it’s this girl’s been convicted that such is the case.

Know ye not that they which run in a race run all, but one receiveth the prize? So run, that ye may obtain. And every man that striveth for the mastery is temperate in all things. Now they do it to obtain a corruptible crown; but we an incorruptible. I therefore so run, not as uncertainly; so fight I, not as one that beateth the air: But I keep under my body, and bring it into subjection: lest that by any means, when I have preached to others, I myself should be a castaway. 1Corinthians 9.24-27

I am genuinely working at setting my thoughts on Christ who strengthens me and who sustains me. For I have this peculiar relationship with food…. I eat it mindlessly, think I need it endlessly, think about its taste, origin, and mull over beautiful preparation and presentation and at the very same time don’t care much about it at all. Truth.

I smile at this train-wreck of thoughts bcz I’m much like my dad — my dad who didn’t raise me but who instilled in me (and my brother) a love for food — the planning, preparing and presentation of good food. My brother followed in footsteps he never actually witnessed while growing up. He pursued the same career though it was quite opposite the “growing up” life/training. Now there’s a nature/nurture conundrum — but that’s a topic for another day. Our dad was a cook, a chef, a restaurateur and food connoisseur. I think of him so often when I prepare specific things he taught me to make. I miss him… only knowing him in my adult life and seeing his passing way too soon. I can chuckle now… and ask… was it healthy to be overweight? Did it contribute to or hasten his passing? I need to end here for today… as I am nose-diving into an arena that is distinctly different than this post begin.

I am smiling as I think of a picture my brother gave me… that was our dad’s and is sort of a picture of his life (and ours). It hangs in my kitchen today. Eating carrots and reading a diet book… sitting in a bakery. Actually, the epitome of my dad would have been talking about a diet, eating something delicious. That, or dieting while holding a cookbook detailing sumptuous food preparation. 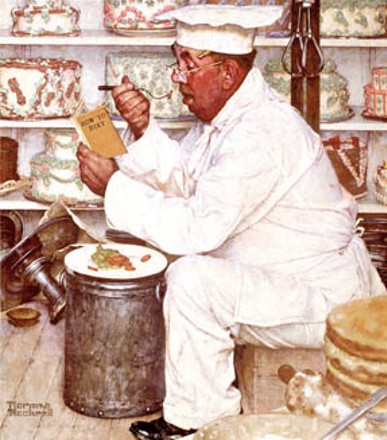 0 thoughts on “Striving for mastery”

Jumping Off The High Dive