THM or A Plan On The Shelf 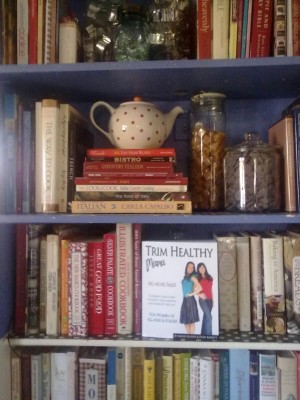 October 17, 2013 I received my book… and I wrote about the THM journey here with additional entries following.  I wasn’t so much seeking to be a trim healthy mama as much as I was determined to be a healthy mama who happened to figure out how to be and remain disciplined and trim.

I had such determination and such confidence.  And success, too.
Life happened. And failure.

This morning I’m cleaning up from a few different events in the last several days and all I see around me are large bowls, serving platters, large carafes, stacks of other dishes, paper products… all the aftermath of food. Lots of food.  My scale showed me that, too.

In the early days, I was trying to figure out how THM was going to fit in with my life. This bookshelf in my kitchen sort of represents my life. But, I’m telling you, it took no time to figure out that that was the wrong question – the wrong premise on which to embark on the THM journey. I couldn’t even reword that premise to be: how can my lifestyle fit into THM?  Though, I did learn to adjust right away, feeble as it was, it wasn’t at all bcz the THM plan  fit into anything and not even bcz I fit into the THM plan.  It was simple determination to deny self and walk on in faith that I could be free from the grip of undisciplined consumption and THM plan was the path to that freedom.

Somewhere along the way, small compromises deterred me from wholeheartedly walking on that freedom path.  Small and then absent minded great compromises dull the sharp resolve of discipline. Somewhere along the way I lost sight of the plan, of my resolve to be self-controlled and resolute regarding food (read: sugar).  And nothing cements repeated failure more than repeated lack of determination.  I typed and then removed a sentence here — it went something like “…lack of a plan.”  But I had a plan.  I had a very good plan.  And when I stuck to the plan, it worked very, very well.  It’s a good plan.  But a plan on the shelf is not the same as a plan in the mind, a plan in the hand, and a plan in the will and a plan in action.  A plan is worthless when not accompanied by resolute determination to carry it out.

Excuses?  Loads.  Loads of ’em.  Reasons?  Many.  Many valid reasons if reason excuses failure.  And then there’s the worst of all: Compromise.  I look at where I am today compared with where I was seven months ago and I reason that where I am is surely not where I was seventeen months ago.  I reason, I’ve only gained 5 or 6 pounds in the last seven months… that’s not too bad, really.  I mean, considering, I already lost 35 pounds, so only gaining 5 or 6 pounds is not that bad.   Not that bad is one the greatest enemies I have. Compromise is an enemy when it’s not used very carefully and in the right situations.  Rarely is that the case.

Is the 5 or 6 pound gain the problem or the failure?  No.  Taking my eyes off the plan (could be any plan by the way — not stuck to the THM-only-no-other-will-do notion) is what’s disconcerting to me.  Failing to be, and remain, determined is what I mean.

I want to be, to become, and to remain: Determined.  I don’t want my plans to be on the shelf…

The irony of this thought was not lost on me this morning as I was reading my Bible — reflecting on the content and cross references.  I thought, why do I ever get away from doing this?  Why is this hunger for the Word so diminished  sometimes? So prone to wander… Why are these precious insights so dimmed on one day and not another.  Determination.

So many areas of our lives are so inextricably linked.  Isn’t the Lord so merciful to let us see these connections, fall and get up, by His grace, taking His hand?  Isn’t it gracious of Him to bring to remembrance different parables to keep our eyes on Truth?

2 thoughts on “THM or A Plan On The Shelf”