any women are enjoying great success following the Trim Healthy Mama book & eating style or plan.  But many women aren’t.  I notice this many times as I read the different posts on the Facebook THM group “encouragement page” [my description] and the number of comments  that are either negative or reflect a lack of being able to stick with the THM meal plans.  Many women are simply feeling defeated as they try to “stay on plan.”

I don’t know why this is, exactly, but I think it has a lot to do with the proliferation of diets, programs and diet foods many women have tried (and failed) or have tried with  some success but as soon as the diet was ‘over’ or abandoned, the weightloss was erased and the weight increased.  Again.  There’s some strange psychological phenomenon that seems to occur with weightloss — especially major weightloss.  It’s like there’s a goal weight or a certain length of time for the ‘diet’ and then when either are achieved, the dieter rewards herself with food  — lots of the old “recently forbidden” delicious foods — and, just like that:  all that work, all that sacrificing, all that time spent straining toward the goal… Poof! Gone.

I know.  I know this all too well.

So what’s made *success* with THM different?  Is it the actual plan?  Is it all the camaraderie and support?  Is it the Thirty-Five dollars for the book?  Is it sheer desperation? Is it Skinny Chocolate? Is it all the incredible before/after photos?  I don’t know.  I really don’t know what it is specifically.  But one thing I do know — and that is, for me, it’s been a Spiritual journey.  And a preparedness journey.  Sincerely, both.

It’s been a Spiritual journey bcz the Lord has met me every day “where I’m at” food-wise.  It’s taken me years and years to realize that one of my natural bents has not been discipline or preparedness.   My ‘natural bent’ is not discipline — it’s haphazardness, really.  My natural inclinations are to just do whatever, whenever and eventually cover all the bases.  My natural inclination is to wing-it and hope for the best outcome.  So, I sincerely must determine to not follow my natural bent, to not fall into my natural inclinations.  And to do this, I have to intentionally determine I will or won’t do something, I will or won’t think something.  And, that’s where the Spiritual component (for me) comes in.  I’ve really had to seek the LORD and His work in my life to get to this point and, by the grace of God, He has met me at every single turn — He has already been there at every single point of need.   Sincerely, He has.

And, it’s been by His grace that I have been able to be prepared —– even when I didn’t think I was prepared!  He has enabled me to gather what’s been needed, He’s enabled me to make the choices I’ve needed to make and He’s given the grace to turn from things I *never* *ever* *ever* thought I could turn away from.    And so, much to my great amazement, I’ve stayed “on plan” for five months.  For five months I have not strayed from the plan—–even though I’ve done it feebly, or probably not 100% correctly — I’ve probably had incorrect proportions for meals, eaten meals in an incorrect order or time-frame, etc., etc.  But what I mean to say is that for five months I’ve not had any of all those things I thought I could never do without, all those foods I thought I loved and all those foods I thought I had to have.  And, five months of not knowing the taste of *many* foods and meals I’ve prepared.  For a taste-as-you-go sort of cook, for a taste-and-see-if-it’s-good sort of cook, this is nothing short of amazing for me.   To not have tea with milk and honey every morning and every evening before bed is amazing.  To not have a grande mocha coffee or two, every single morning is also amazing to me. Sincerely, it is.

So about THM preparedness… you gotta know that this is probably (second to the Spiritual aspect) the most important thing.  A failure to plan is truly a plan to fail.  If you can’t get this, then probably no “diet” anywhere is going to help you.  I know this personally—with many years of assorted “diets” behind me —– many years of wishing to lose weight or, rather, to maintain weightloss or many years of hopelessness for weightloss behind me.    But THM is and has been different for me… because it’s a way of living, planning, eating and succeeding.   Sincerely, it is.

So here’s the net-net for you… get the book.  Read it from page one to the end.  O, I know… it seems so much more efficient to just get the facts— you know, tell me the menu plans, define S and E and FP and Crossover for me.  I don’t have time for all the rest.  I just want to get started.  I know.  I thought those same thoughts.   Here’s the deal:  The facts start on page one.  The conversation begins there and ends with your filling in notes on the several blank pages at the end of the book.    And in the middle somewhere, is the click.  The click where you’ll ‘get it‘ and really begin to follow the plan.  Just remember, if you just want the facts … they start on page one.  Sincerely, page one and every next page thereafter. 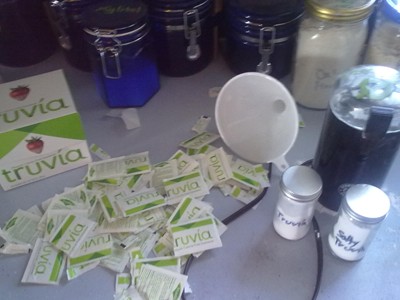 Ground Truvia…
little jars, shakers, etc., etc., and  a “coffee grinder” dedicated to my THM “sugar” etc.
Totally worth it.
And, as my husband recently said, it’s worth it at twice the price. 😉  Sincerely.