A little over three months ago, I ordered the Trim Healthy Mama book.  I kept ‘stumbling’ into links and recipes during searches for health, no sugar and a few other search words I used each day googling for ‘healthy’ foods — or foods with no sugar.  I would read recipes that women had adapted or linked from the THM book and I’d think:  I could NEVER do this… well, at least not for long.  And given the fact that I only knew how to crash diet, I thought it would be pretty hard thing to justify spending $35. on a book.  The only books I’ve bought in recent years that cost near that much were a couple of CAKE books!   So, yeah, I had my priorities.   But a few days went by and I kept mulling over the thought that it just might be a good idea… I even thought that the price alone might force me to behave and follow the diet—even though I really didn’t have any idea what the plan really entailed.   Then there was the thought that I surely wouldn’t do a vegan diet or an all raw diet… no, I had not been there done that… I just never wanted to be there doing that, that’s all.  And then there was my beloved every morning cuppa tea with milk & honey.  And then there was my every morning café mocha.  Or two.  And then there was my every single evening cuppa tea with milk & honey.  And then, of course, there were all those other beloved carbie foods.  The food of my people.

But I wasn’t feeling well.  Health problems were driving me to do something… anything… but something different than what I was doing.

So I bought the book.  I know… I know… I should have consulted my husband and should’ve talked it over.  When the book arrived, I did talk it over with him.  Now three months later, you know what I wish?  I wish I’d explored it sooner—I wish I’d bought it sooner.  But I didn’t.

Looking back on that day — the day I was standing at my butcher block table next to the bookshelf in my kitchen — having just come in from the porch where my UPS man had brought me my package, I was excitedly opening up the cardboard packaging.  I pulled out that enormous book—held it up—and at the time, I didn’t realize I was holding up the book against the backdrop of that bookshelf filled with every kind of not-so-trim-healthy-mama  book there is!!  I set the book down on the shelf and laughed… and wondered, where does this book fit in with my life?  It didn’t fit in…  and that’s why I was where I was that day. 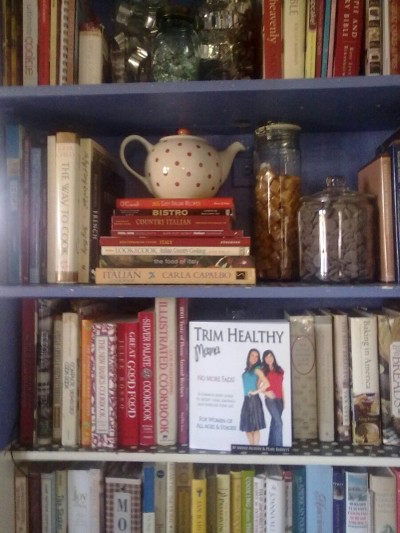 One thought on “three months = thm”