On the first day of my fiftieth year… my husband’s family began arriving for the funeral and memorial service for his grandmother.  It was a bittersweet day as many gathered to honour her — to pay their respects, laugh, cry, look at photographs, reminisce, sift through treasures and memories and to lay to rest a woman who’d spent her whole life toiling for the Lord and for those He brought across her path.

At nearly one-hundred years old — twice my age — she had lived a very full, very rich life.  However, by many standards, “rich” might not have been the first word one would utter when taking a look at her life. But it was rich.  It was, in fact, very much so.  The faces, the tears, the smiles, the recollections all formed a collage of chapters and stories of a woman whose life had had a tremendous impact on many, many others.  Her life was a gift and she allowed it to be used of and poured out by the Lord. It reminded me: tell people what you think while they’re living — say ‘I love you’ while you can.  Live well as long as you have life!!

I thought then (and have done so many, many times in this past year):  so many people came through the door of her home… many left there: changed – many were saved for the Kingdom of God.   Many came in to help — but left: helped.  Many came to give her gifts — but left with more than they could carry — in their hands or in their hearts.  That’s just the kind of woman she was.  I love that I knew her and I love that I had the opportunity to spend time with her.  I love that I had before me a living testimony of the faithfulness of God.  I love that I saw an example of tenacity and strength – even in weakness – even in sickness.

I love that I saw my husband’s loving interest and care for his grandmother and that he has the same twinkle in his eye she had in hers.  I love that she was a woman of faith and a woman of prayer and that many, many had come to her ‘family alter’ for prayer and stayed there until a matter was prayed through.  The same has been said of my husband’s mother’s mother and mother’s grandmother as well.  It was a very bittersweet grief when his other grandmother died 17 years ago… I had that same sinking sadness when this grandma died… knowing that one less person would pray for me by name every day.  What a comfort that is to know someone’s praying for you by name day after day. 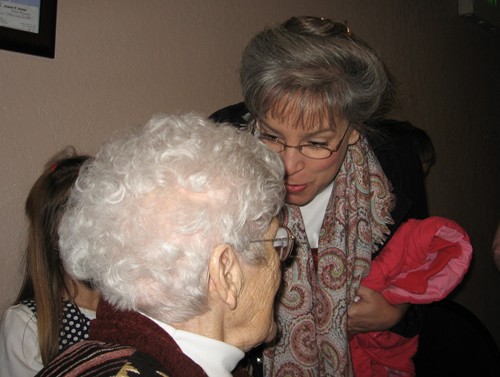 And so… O, what a legacy of faith my husband brings and now passes to his grandchildren.  And I am so thankful to have begun my fiftieth year in that place… in that way.  It was as if to show me:  this is the way, walk ye in it.

I often think of the prayers of mothers and grandmothers… still ascending to the Throne of Grace — it is a charge to keep.  What a blessing to have witnessed the testimony of faith and to have that path so clearly and beautifully demonstrated before me.

“And the smoke of the incense,
which came with the prayers of the saints,
ascended up before God
out of the angel’s hand.”
Revelation 8.4