Now two thirds of the way through her stay in Uganda, East Africa, we are sooooo missing our precious girl.  I’m not sure which gripped me more today… finding out that she’d just received a package that was carried into the country or calling her and getting cut off as she was, in mid sentence, describing to me her delight at the things we sent and how glad she was tha…

I attempted many times to call her back… thirty-seven numbers over and over… and each time hearing: “The number you are attempting to call is not in service at this time…”  So, I wait, and in three hours I will attempt to call again.  I miss her more with each passing day and with each passing day I think of more things I wish I could tell her or show her and I so wish I could hear her play the piano.  But even having said all that, I would not wish for her to have missed this trip for anything and I would not wish her home a day earlier than the time planned for the work there, and I surely would not trade these days here praying for her, watching for her, reading her letters or hearing her long-distance calls; no, I wouldn’t trade these days for anything. 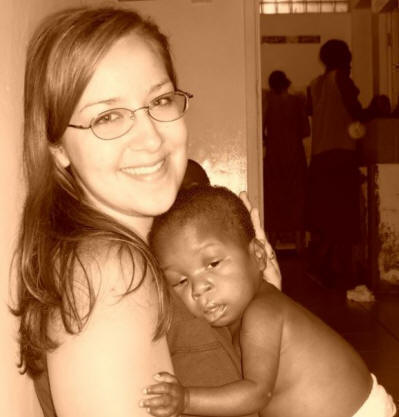 I was thinking of her piano playing and was just reminded of a special blessing of the LORD.  She’s been longing to play the piano… sort of as one is thirsty on a hot day, that’s how she longs to play the piano.  Several weeks ago she began asking different ones she’s met if there was a piano somewhere.   She had been telling us how she so longed to play something – anything!  We smiled and prayed she’d have some opportunity somewhere.  But, pianos are extremely scarce and even keyboards are rare and though she ordinarily does not like keyboards, she would more than gladly play one if even for a short time. So the weeks went by and as God would have it, there was a sweet and unexpected opportunity to play the Good Friday service in a church in Jinja.  She loved that so much and shared with us how much it meant to her.  Anyway, that was just one of many of the sweet serendipities she’s received or experienced while there in Jinja.

I think that opportunity will fill a sweet spot in her heart as she looks back on days in Jinja.  Music is “everything” to her – or so she sometimes says.  I know her favourite to play is the grand piano and we’ve often teased her that that’s how she will know it’s time for her to marry…  a grand piano will be delivered to her home since she’s often said that’s the only thing she really wants.  And, knowing that one would never fit in this old farmhouse – it will have to be in hers ~smile~ someday… that is unless the LORD would have her in Jinja… then… well… pianos would diminish in significance.