When You Know What God’s Called You To 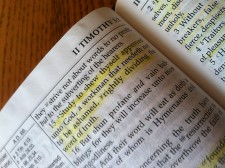 Thanks for joining me for morning coffee ☕
Blessings to you all as you seek to follow what God’s called you to.

When we fail to seek the Lord, to embrace the truths we know, the great and precious promises in God’s Word, and the convictions we hold, we can easily be deceived by smooth speech, pretty lures, and popular trends.

We read in the Word the importance waiting daily at the gates of the Lord: “Blessed is the man that heareth me, watching daily at my gates, waiting at the posts of my doors.” —Proverbs 8.34
And why would we do this—why should we do this?  Because the days are evil, the days are filled with deceptions, traps, lures.  Look around you, everywhere: traps — sights, sounds, enticements and distractions that would lead us astray if/when we yield to them.

Blessed is the man that heareth me, watching daily at my gates, waiting at the posts of my doors.
When you know what God’s called you to, you’ve got to then determine to guard whatever that is.  You and I must be vigilant to watch for the snares that would entrap us.  Most all sin begins with a deception–sometimes so seemingly inconsequential, it’s easily dismissed.  By nature, we want to dismiss sin, and when we’re not walking in the Spirit, we’ll most assuredly be blindsided by the entrapments of sin. If we’re not daily at His gates, abiding in Him, obeying His commands, listening for His promptings, we’ll be prone to entertaining {maybe even personally adopting} deception.

Sometimes we don’t recognize the trap until we’re entrenched in it.  Smooth speech, in particular, is but one trap.  Think of books, articles, seminars, conferences you may have read or attended.  It’s so easy to get caught up in the emotional excitement of the moment, to get tangled up in love for the captivating or entertaining messenger—so much so, that Biblical inaccuracies of the messages may be overlooked.  Think of popular Christian women making the circuits today. It might be uncomfortable to stand against the rolling tide, but it’s not that difficult to see deviations from Scripture–though perhaps they’re subtle.  Over time, if left unchecked, the deviations might be excused because the messenger is so popular (Luke 6.26), believable, and adored by Christian masses {maybe even our own dear girlfriends—or ourselves!}.

Often, when we see error, we don’t want to be the girl that rocks the boat. But, surely, when we see the girls running to that side of the boat, and we see that it might result in capsizing, we must dare to be that girl to right the ship—to warn the passengers leaning over the edge!  We must endeavor to speak the truth in love. With tact. When you know what God’s called you to, you seek to live it.

When we quiet a caution or silence an alarm, we tend to deafen our ears to hearing, dull our consciences listening to the still small Voice, and quiet promptings of the Holy Spirit.  When we repeatedly allow this to happen, we become silly women. Those promptings—those great and precious promises we have known—begin to be scattered in the path behind us —opening us to error, heresy, and to embracing the deception of the pretty lures as we begin to accept another gospel—another way—ever learning but never discerning the folly. It may begin with just a small step off the path, but down the way a bit, the path is nowhere to be seen.

“For of this sort are they which creep into houses,
and lead captive silly women laden with sins,
led away with divers lusts, ever learning
but never able to come
to the knowledge of the truth.”
—2Timothy 3.6-7

So, those things God’s called you to?  Take in the Word today. Seek it, study it, pray about it. “Study to shew thyself approved unto God, a workman that needeth not to be ashamed, rightly dividing the word of truth.”  2T 2.15
When you know what God’s called you to, you’ll seek it,  you’ll endeavor to walk in Truth, it will be your joy to be called by His name, His great name.

“Thy words were found, and I did eat them;
and thy word was unto me the joy and rejoicing of mine heart:
for I am called by thy name, O Lord God of hosts.”
—Jeremiah 15.16