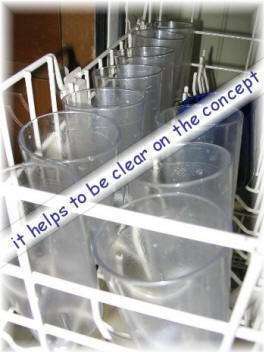 After writing last week how I dealt with starting out unprepared, my friend wrote about lists I used to have on my walls. So I thought I’d continue on today sharing about lists and how to use them — remembering: lists are tools, they’re simply tools.

Again, I wasn’t born organized — I’m not a naturally organized girl, but life as a mother to many children gave me much practice and many opportunities to test the results of being disorganized and being organized. And, believe me, organized was better. It’s still better — and it is for so many reasons I actually had no grasp of at the time.

Lists help us to be clear on the concept.  And, as the picture to the left shows, when a child isn’t clear on the concept, what we want to have happen isn’t going to happen!  In this case, I needed the dishwasher to be loaded. And it was.  But what I wanted was clean dishes — that wouldn’t have happened if some instruction, care and attention to detail hadn’t been given.

List help us. Lists help us to be careful, thorough, and efficient.  I totally get that lists and schedules are confining — the abstract/random in me knows that feeling very well! But it’s in the confines of the list that our true desires can be laid out.

Lists help us not only do what we ought, but also what we want.  Most of us want a clean house, for example, and more, we ought to have a clean house. But it’s more fun to hang out on the computer, or go to the beach or to the lake or swing in the park. It’s more fun to chat over coffee, read a book, or go window shopping.  Interestingly, lists that help us do what we ought, also help us do what we want — they help us accomplish what we ought to have done so that we can have time to do whatever else we want to do. ~smile~

For years I had lists on the walls of rooms in our home.  Some of the lists detailed, in order, what was entailed in cleaning that room.  In time, these lists became more than cleaning tools.  As I would later learn, they were a discipline tool, a work ethic tool, a negotiating tool, and a great feedback “check-list” for the room when it was pronounced “all clean” by whichever child(ren) doing the job.  Since the list was on the wall, children knew it wasn’t just an arbitrary decision what to do to clean the room. I worked side by side whoever was learning to do a job until I knew they really knew what to do.  I didn’t want to set them up for failure… I wanted them to win. ~smile~ Often, it would have been so much easier and quicker to just do the work myself, but then, that would have defeated my purpose in bringing up children.

So, as an example, on the kitchen wall, (as best I can recall) I had a laminated list something like this:

To Clean This Kitchen

Unload the dishwasher
Clear the table to the kitchen
Wipe the table and the chairs with a clean, damp cloth
Put away the milk and wrap “left-over” foods, etc., into the fridge
Scrape, then Rinse the dishes, load the dishwasher
Wash the pots, pans, griddle, etc., with soap and hot water
Dry them with a clean towel and put them away
Wipe the jars, mixer with a clean dishcloth, rinse the cloth
Wipe all the counters, start at one end, all around the kitchen
Wipe the stove top, rinse the dishcloth
Wipe the drawers, cupboard doors, stove door, refrigerator door
Rinse the dishcloth, hang up the towel
Sweep the floor
Take out the trash (if needed)
Take the dishcloths and towels to the laundry (if needed)

I shared earlier that these lists did much more than outline the job. They helped kids (and myself) see what was expected and gave them opportunity to negotiate who would do what on any given night as there were generally at least a couple of kids doing the work.  Occasionally, I’d be in on a plan where one child offered to do another child’s job if they did their job.  I tried not to be too strict on who was doing what — only that everyone had to contribute what they were capable of doing in one way or another (on that or some other job in the home).  All along the way, they were learning skills, they were learning to work and the repetition helped them learn to be thorough in their work — whatever it was.  And to this day, they, each one, amaze me with their attention to detail on jobs.  It’s one of the “I’m glad we did that” things I look back on.

Why didn’t I do this sooner?

The Next Right Thing