A lot of water under the bridge…

Since my last blog entry to this, there has been a ‘record’ amount of water under the bridge… and the normally green farmland that surrounds our home now appears to be a lake.  One of the captions in the local paper read, “A series of homes and barns cling to strands of dry land in Snohomish on Friday.”    I don’t know if I’d have described our home as clinging to a strand of dry land, but it was certainly sitting in the floodwater and the LORD surely had it anchored.

Someone commented to us, “You’re fortunate that you have a good foundation on that old farmhouse.”  Just between you and me, I’m not so sure this hundred year old farmhouse does, in fact, have a good foundation.  But I told that friend, yes, I am so thankful for the good foundation we have… come what may, high water or no… we ever stand in His hand.   Praise the Lord for His goodness and mercy — this house only stands bcz of His mercy and one day, it might be in His providential mercy that this house no longer stands as it does today — but we will stand in Him.

We had to leave our home last week as the floodwater was rushing in under the bridge… I stayed watching for a bit – intrigued by many things.  One being, the power of water – the intense sound and speed of rushing water – the power to wash away, the power to damage and the power to set courses — all these thoughts and more were running through my mind.  As we were driving out, I had to just stop and watch — rushing rivers are so incredible and watching rushing water is mesmerizing.

So after a few more minutes, realizing there was no more time spend there watching the water rise… we made our way down the lane with what’s most important to us — our children — along with some generally unimportant material goods, and we caravanned to the location where we would spend the next week.

It’s a heady rush planning to leave home in anticipation of a flood –unimportant things become sentimental and what might be truly valuable almost becomes inconsequential.  Determining value of personal possessions is such a subjective thing — I mean, it depends, literally, what room of your house you happened to be in during the last few minutes.  Suddenly, you’re faced with a few minutes to make some, in terms of material goods, important decisions.  And your decisions become clouded by the tyranny of the urgent.  I kept laughing as the tremendous sound of the rushing water became more pronounced (I was laughing partly out of nervousness and partly from the sheer excitement of it all).  Drama.

I’ll give you an example… I was gathering the already packed bags and asked the children if they had their schoolbooks — what was I thinking? Were we really going to do school work?  History — I mean *our* personal history — would have told me: no.  No, there won’t be any significant studying in the next week.   And if books were the important matter, why didn’t I take measures to bring out the truly important, much more valuable by comparison, books?   Anyway… that’s but one example.

Actually, water lines and debris indicate that this photo was taken after the water had receded just a bit.  The trees (there are actually very tall trees on either side of the River) shown near the top of this photo are where the Snohomish River is.  Usually. 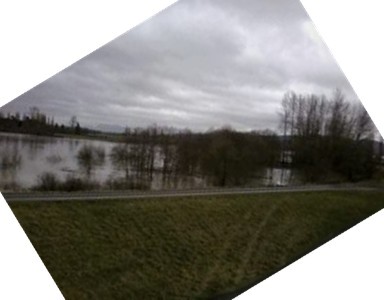 This is the Snohomish River the morning before the flood.  Oooo… very, very high.